After a solid performance at home, Stade Rennais won a logical victory against Paris Saint-Germain (1-0), this Sunday, at the end of the 19th day of Ligue 1. The championship is relaunched!

A small game of Messi and PSG

Paris Saint-Germain is going through a complicated period. Two weeks after a loss to Lens (1-3), Christophe Galtier’s team conceded their second defeat of the season on the lawn of Stade Rennais (0-1), this Sunday, at the end of the 19th day of Ligue 1 .

After this new misstep, PSG is still leader of the classification but now only has a three-point lead over Lens and five over Marseille. Rennes is fifth and keeping pace with Monaco, fourth with the same number of points.

Contrary to their habits, the Rennais started this meeting in 5-3-2. Consequence of significant absences (Bourigeaud, Terrier) or tactics prepared to counter this PSG? In any case, the system put in place by Bruno Genesio was a perfect hindrance to the Parisians, who couldn’t get into Mandanda’s area. Messi and Vitinha then tried long shots, without success. The first big chance was even Rennes: Kalimuendo took back, with a recovery from the right, a cross from Truffert but found Donnarumma on his way.

Behind, the Rouge et Noir were more enterprising and insisted with attempts by Majer, from a free kick, and Traor, from a pivoting recovery in the area, but the Parisian goalkeeper was vigilant to preserve his clean sheet. The Italian was still present then on a strike from Gouiri from the entrance to the area. As the break approached, Paris finally managed to enter the opposing area, but there was always a foot to deflect the attempts of Vitinha and Messi. PSG therefore ended the first period without a single shot on target (out of 5 attempts).

Upon returning from the locker room, the Parisians seemed to want to press the accelerator. But the Rennais were still as solid and continued to offer themselves dangerous situations. Finally, Traor took advantage of a new overflow from Truffert to open the scoring with a shot from the left crossed low to the ground (1-0, 65th)! Roazhon Park let their joy explode to celebrate this goal which rewarded the fine performance of their protégés. Before shaking moments later.

Because PSG had the opportunity to come back to score very quickly. Entering the game to the applause of the Rennes public ten minutes before the goal, Mbapp had the ball for the equalizer at the end of his foot on his first opportunity by appearing alone in front of Mandanda, but the vice-world champion sent his shot over above the goal. The only real goal opportunity for Paris, which did not show much offensively in Brittany. And this time, it was not enough against a Rennes team at this level.

In a very nice atmosphere at Roazhon Park, the meeting took a little while to start. If the first period did not keep all its promises, while remaining pleasant, the second act was more lively.

– Launched by Theate in the area, on the left side, Truffert resists the return of Hakimi and serves back towards Traor, who scores with a shot from the left crossed on the left of Donnarumma (1-0, 65th).

Maxifoot has assigned a score (out of 10) comments on each player.

What a performance from the Croatian! As is often the case in big matches, the Rennes midfielder played to their best level. And that’s usually not good news for his opponents. He imposed his law on PSG circles, doing a lot of work in the pressing and projecting himself to support his team’s offensives. No goals or assists, just spades of differences and outstanding work. Replace the 89th by Flavien Tait (not not).

Steve Mandanda (6): the goalkeeper finally had very little work to do since PSG only framed one shot. He was good in his ball shots and won his duel against Mbapp by pushing the Parisian striker to hit above the frame.

Hamari Traor (7): the full-back had a lot of activity in his right lane, whether defensively – to make several interceptions and win in the duels – or offensively with his goal in particular which allowed Rennes to win. An exemplary captain!

Christopher Wooh (6): a clean match from the central defender, who never flinched when the Parisians increased the pressure. He even answered with authority, like his big intervention on Bernat in the area.

Arthur Theate (7): like his two partners Rodon and Wooh, he worked perfectly to prevent the Parisians from being threatening in the area. But he was also interesting in the projection, and it is he who launches Truffert on the action of the goal.

Adrien Truffert (7.5): the left side was there in this poster. In his lane, the Rennes defender was omnipresent, whether in the pressing or the projections. If Kalimuendo did not concretize his very good cross in the first period, Traor took advantage of a new overflow from the French international to score. Replace the 76th by Birger Meling (non not).

Chimuanya Ugochukwu (6): the young midfielder was invaluable in midfield to close the passing lines in the center and prevent the progress of Messi or Neymar when they came down to face the game. Not clumsy also ball at the foot, the image of his little bridge over Vitinha.

Dsir Dou (5): a good match for the young talent from Rennes. He worked a lot defensively to hinder the recovery and scrape balls. We could expect a little more from him offensively, but his defensive activity inevitably weighed on the legs. Replace the 68th by Jrmy Doku (not not).

Amine Gouiri (5): it’s not really the style of match in which the former Niois can express his qualities as a finisher, but he perfectly respected his mission by hindering the Parisian recovery and keeping the ball to allow the block Rennes to go up. Precious. Replace the 89th by Kamaldeen Sulemana (not not).

Arnaud Kalimuendo (6): the Rennes striker obviously wanted to show up against his training club. Explosive and solid on his support, he bothered the Parisian defense a lot. The former Lensois gets the first goal opportunity of the match on a recovery rejected by Donnarumma. Replace the 76th by Lorenz Assignon (not not)who misses the break point at the very end of the match.

Gianluigi Donnarumma (6): the Parisian goalkeeper did not have much to reproach himself for in this meeting. With four saves in the first half, the Italian kept his team in the game against pressure from Rennes. He must bow on the strike of Traor in the second period.

Sergio Ramos (5): aligned to the right of the three Parisian defense, the Spaniard was not bad. But not brilliant either. He compensated for his lack of liveliness against Rennes by putting physical impact in the duels, which led him to make several mistakes.

Marquinhos (5): like Ramos, the Brazilian defender did not feel any superiority against the Rennes attackers either. At the moment, the best version of Marquinhos is still pending.

Danilo Pereira (5): starting left of defense three, the Portuguese made his match. Serious and diligent, he was content to ensure the recovery and to block the spaces well. Replace the 83rd by Renato Sanches (not not).

Nordi Mukiele (4): rather interesting in a few offensive situations in the first period, the right piston was still in difficulty against a very restless Truffert who managed several overflows. Replace the 55th by Achraf Hakimi (not)who is surprised by Truffert on the Rennes goal.

Warren Zare-Emery (4): a first tenure in L1 rather shy in the game for the young midfielder. If he showed that he was not afraid to go into contact, his offensive contribution was quite limited in this meeting. Replace the 72nd by Carlos Soler (not).

Vitinha (4): the midfielder did not deliver his best match in the Parisian jersey. Physically jostled and not always inspired in his defensive interventions, the Portuguese had difficulty weighing in the battle of the midfield. Replace the 73rd by Fabian Ruiz (not not).

Juan Bernat (5): in his left lane, the piston first tried to defend well. Over the minutes, the Spaniard was more present at the front to try to bring danger to his side.

Lionel Messi (4): the world champion was not celebrating in Brittany. If his return against Angers had shown great promise, the Argentinian did not follow suit. In the first period, he tried to take the game on his own by picking up a lot and guiding with intelligence. But he totally disappeared after the break.

Neymar (3): the wrong version of Neymar. The Brazilian tried to drop low enough to face play, but he never really weighed in midfield. Physically consumed in the duels, little inspired in his passes and without juice on his accelerations, the former Barcelonan was having a bad evening.

Hugo Ekitike (2): performing for several games, the striker did not have the same success tonight. Cut off from balls, he did not weigh in on the debates (10 balls hit, 4 lost). Replace the 55th by Kylian Mbapp (not not), standing ovation by the public during his entrance. It should be noted that he had the ball for the equalizer at the end of his foot on his first opportunity by appearing alone in front of Mandanda, but the vice-world champion sent his shot over the goal.

+ Find the results and the classification of Ligue 1 on Maxifoot

And for you, who were the best and worst players of the match? Comment in the “comments” box below! 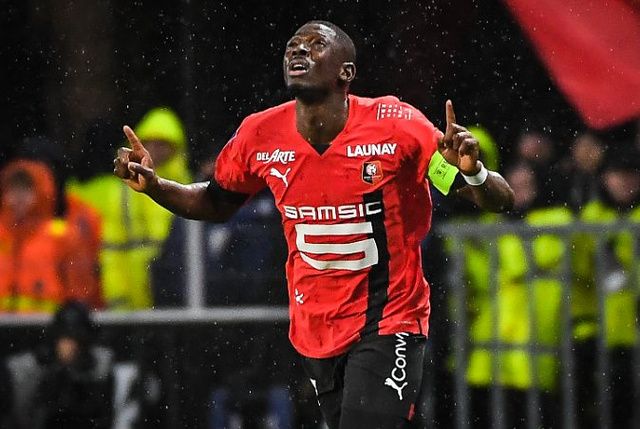 A worrying level for Neymar 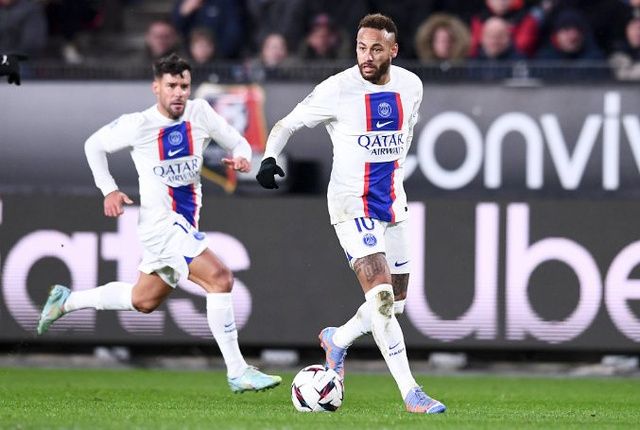 Ekitike did not exist 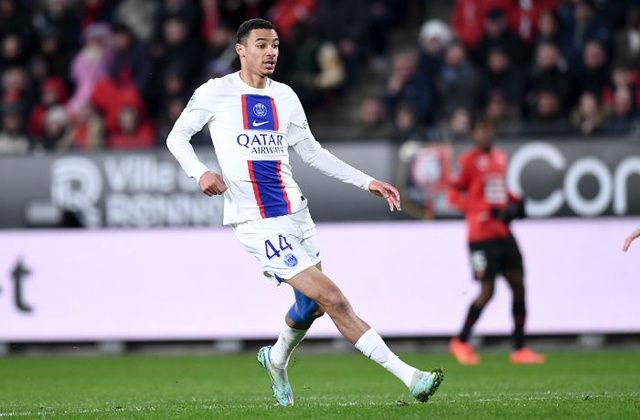 A Messi without genius 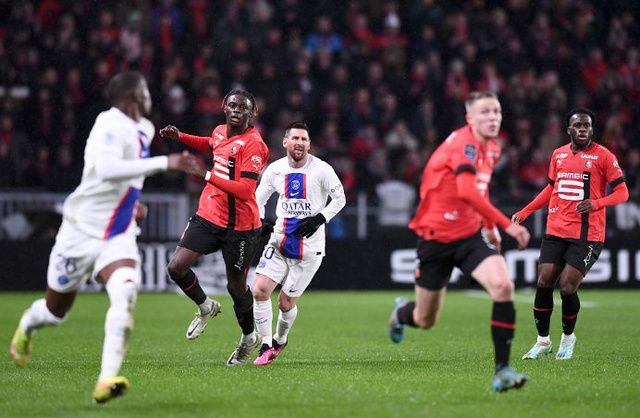 VIDEO: Mbapp applauded by the Rennes public during his entrance

LIVE – PSG: “We must respect, and we must listen to Navas”, explains Galtier

Foot PSG – A surprise on the gong, the PSG puts the package in the transfer window

“Ramos is at the end and it pains me”, points out Di Meco

Kylian Mbappé in an unlikely outfit during the visit to the...